There are many reasons why I started Design Discipline. This "meta" essay outlines one of these.

I’ve been immersed in the academic world for some years now, but in truth I’m fascinated by business. In college, I majored in economics alongside engineering. Almost half of my library is business books. My research and teaching happens at intersection of design and computer science, which is as close to business as any academic field can get: the 8 most valuable companies in the world today are born from this intersection.

In turn, from my academic colleagues, I hear very frequently that “the university is not a business.”

It’s true. Academic scholarship, compared to business, has different responsibilities and methods. More often than not, however, the idea that “academia is different” becomes an excuse for ignoring knowledge and competence with non-academic origins – the “not invented here syndrome” is very acute in academia.

On the flip side, non-academics don’t engage with academia either, for good reason: academic knowledge is hard to obtain and penetrate. Even if academic texts were freely available,* most of them would be unreadable for all but a single-digit percentage of people.** Even for proficient scholars, digesting a paper – let alone implementing the lessons – can take many days. For non-academics, making use of academic research is a costly investment with unclear returns.

* This is an extremely generous assumption.
** This is based on the approximation that less than 15% of people go through postgraduate education – which is where we learn the skill of reading academic papers – and then, based on my experience, less than two thirds of grad students actually end up with the relevant skills and inclinations.

One of my favorite resources that explains how academic research works is Matt Might’s The Illustrated Guide to a PhD. Might explains how we begin our education from the core of all human knowledge, and advance by first expanding and then specializing. Ultimately, in a PhD, we arrive at the edge of human knowledge. We push at the boundary until we make a dent. Among academic researchers, these dents are called “research contributions.”

But these dents – the contributions that expand human knowledge – are not only made by academic researchers. There are experts and scholars everywhere who make their mark, pushing and expanding the frontiers of knowledge and competence. Great authors, politicians, engineers, marketers, artists, and managers throughout history have published volumes of knowledge to serve us all.

The problem is that, if we keep pushing to make dents in different directions, our bodies of knowledge eventually divide.*

This is tragic, since often a common purpose remains despite the divide. And as people chase a common purpose in separate ways, they end up spending years to conquer goals that are already dealt with by their counterparts,** repeating each other’s mistakes, and at worst, developing animosities.

Finally, we end up with a no-man’s land between the two fields – a terrain where making new contributions is extremely difficult since ideas can’t find a foothold on either side.***

* I recently came across an article by the late Chilean economist Manfred Max-Neef, where he notes how "professors and disciples develop and enhance disciplinary loyalties up to the point of frequently feeling that theirs is the most important of the entire University."

** I witnessed a mild case of this at a research conference, where I met a very smart and delightful colleague – a scholar of music technology – who proudly presented his invention of an exciting new musical instrument. He promptly discovered that the same technology had already been studied in engineering research, funded as a Kickstarter project, and sold as a commercial product.

*** The issue here is not necessarily that people operating at the intersections can’t find the intellectual foundations they need; but more that their results are not appreciated by either side. So, contributions in the no-man’s land do happen, but then both sides manage to ignore them.

The kind of divide that compelled me to create Design Discipline was seeing the academic and the commercial perspectives in my field moving away and ceasing communications with each other.*

To visualize an example, I used Connected Papers to generate a citation graph on Richard Buchanan’s Wicked Problems in Design Thinking – a truly seminal paper on “design thinking” that more than 2000 others have referred to. On one side, I found mostly academic articles with titles referring to research, science, education, and theory – including canonical texts like Zimmerman, Forlizzi, and Evenson on “research through design” methodology. On the other side, the topics turn to innovation, organizations, management, growth, customer experience, and so forth; and books seem to be the dominant format. Connections between the two sides are few – despite explicit claims by researchers like Zimmerman et al. that their work aims to “integrate with and benefit… research and practice communities” in tandem.**

* Ben Thompson wrote recently about a related divide between journalism and business: “After all, journalists don’t know how their businesses work, and they are proud of it!”

** Another interesting feature here is how the topologies differ between the two sides. The business side is more densely connected – a smaller network where everyone is on the same page. The academic side is more of a “star” pattern made of larger nodes – the size of each node suggests there are many lesser-known publications that cite them, but the picture looks more like scattered pockets of knowledge rather than a unified network.

Credit where credit is due: academia and business have different aims and values. All businesses must make a profit, or at least break even. Entrepreneurs face the cruel reality that they won’t be able to pay their employees, let alone themselves, if they don’t make the sales. To survive, businesses must create and deliver value, and they must capture some of that value back. In turn, academia is meant to serve us collectively. One premise of academia is to support projects that have value, but weaker odds for immediate profitability.*

Thus, academia and business create value over different time scales, and have different needs for how much of that value they might need to capture back.

Yet, despite the differences in their fundamental economic structure, academia and business have a lot to learn from each other. And when they don’t, it leads to critical faults.

* In economics there is the fascinating theory of public goods which gives us a shared framework to compare the value of academic and business activities.

Two things that academics can learn from business are relevance and efficiency.

From what I have seen, academics ignore mindsets and tactics originating from business since the fundamental motivations of the business world are not to their taste. Thus, my colleagues argue, business-like ways of doing things taint the purity of academic research and education, where we must build on more honorable motivations to serve the public good. Wisdom from the business world is ignored since everything business is supposed to be motivated by money.

In reality, what defines business is not money but competition. This is a relentless environment where we must act with purpose and precision. We must travel forward consistently, facing the correct direction, and outpacing the competition. Though money might look the end goal on the surface, in fact it is merely the unit of measurement for competitive success. The essence of this success is relevance – serving products for which there is real demand – and efficiency – doing so at a cost that’s less than the value created.

Thus, the success of a business is defined by its relevance for purposes other than itself, and the efficiency at which it performs. To achieve this, entrepreneurs and companies strive constantly for engagement with the world outside their walls, and self-improvement inside.

In contrast, academic work these days is evaluated by its relevance to other academic work only, and its cost seems to imply merit, with less regard to the efficiency of how it is spent.

The values that drive the "pure" vision of academia – longer-term plays on high-risk projects – are over-applied when it comes to its execution and evaluation. Thus, the content in a dangerous amount of academic research and education today has no relevance to the “real world” despite abundant claims by scholars that their purpose is to “inform practice.”

Now I am not making the argument that academics should only work on projects with obvious and immediate applications and commit to cost-cutting. Rather, I propose we turn a critical eye to how the academic ecosystem is organized, and adopt what’s already proven in business to advance the relevance and efficiency of our work – as well as how it’s presented. If the purpose of your work is “to inform practice,” is it wise to base it entirely on academic resources and present it only to academic communities?

Last but not least, it’s not a coincidence that many business books turn to psychology, habits, and relationships as they break down success. If we can embrace “wisdom without doctrine,” the mindsets and tactics used by business leaders and entrepreneurs can serve us to improve ourselves and our organizations too, in a holistic fashion.

Business, in turn, also has a lot to learn from academia. It’s true that tapping into academic knowledge can be a significant investment, but great rewards are there to be had for those who are able to engage and separate the wheat from the chaff.

A popular understanding of academia is one where research publications communicate proven, absolute truths. In fact, research papers are early drafts of ideas, presented to colleagues to be scrutinized, critiqued, and improved. They are complex, because they are unrefined. This is why academic periodicals have titles like “transactions,” “letters,” or “communications.” The typical academic publication is a “journal” – something kept for internal purposes, not for the public.

Businesses that tap into the stream of academic discourse are effectively able to drink upstream from the herd.

This is especially true for hard science and engineering disciplines with a track record around academic research driving actual innovation with experimental results. In businesses predicated on science and technology, those who are able to digest earlier forms of ideas and know-how can effectively front-run technological trends and hype cycles. Careers and fortunes are made in tech by people who can ride waves to the peak of expectations.

Finally, it is not only the results, but also the culture of academia that businesses can benefit from. One one hand, academic ideals like prioritizing data and logic, separating facts from opinions, and accounting for externalities don't implement perfectly in practice; on the other, the degree to which they've been effective is surprising.

My point is that both academia and business breed ideas and practices that are valid and useful. And the best of the best on either side are people who are able to cross the boundaries.

Of course, at the end of the day, none of this is new. Thousands of companies in existence today rely on academia for critical building blocks. And the top academics focus on communicating and deploying their ideas effectively for the right audiences.

So, one purpose of Design Discipline is to create synergy between academia and business with a particular focus: design and entrepreneurship.

I'll leave it to another post to explain why I picked this particular focus, how to attack the problem, and how other ideas like art, craftsmanship, education, and leadership figure in defining what Design Discipline is about.

Sign in or become a Design Disciplin member to join the conversation.
Just enter your email below to get a log in link. 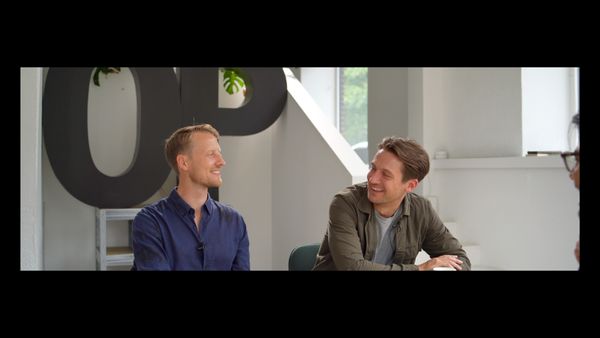 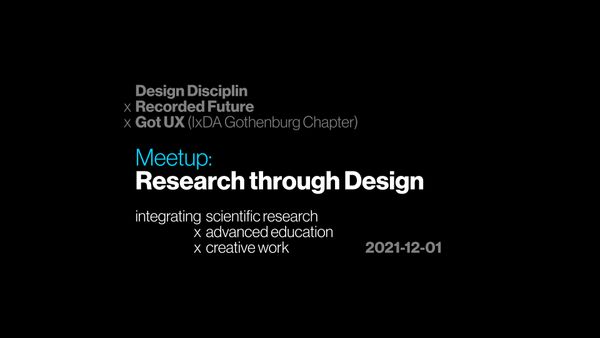 Our first IRL event, in collaboration with Got UX and Recorded Future 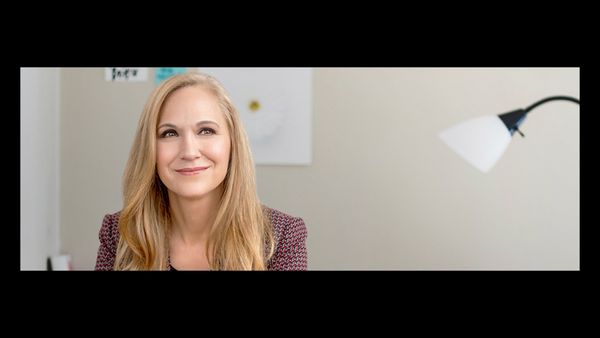